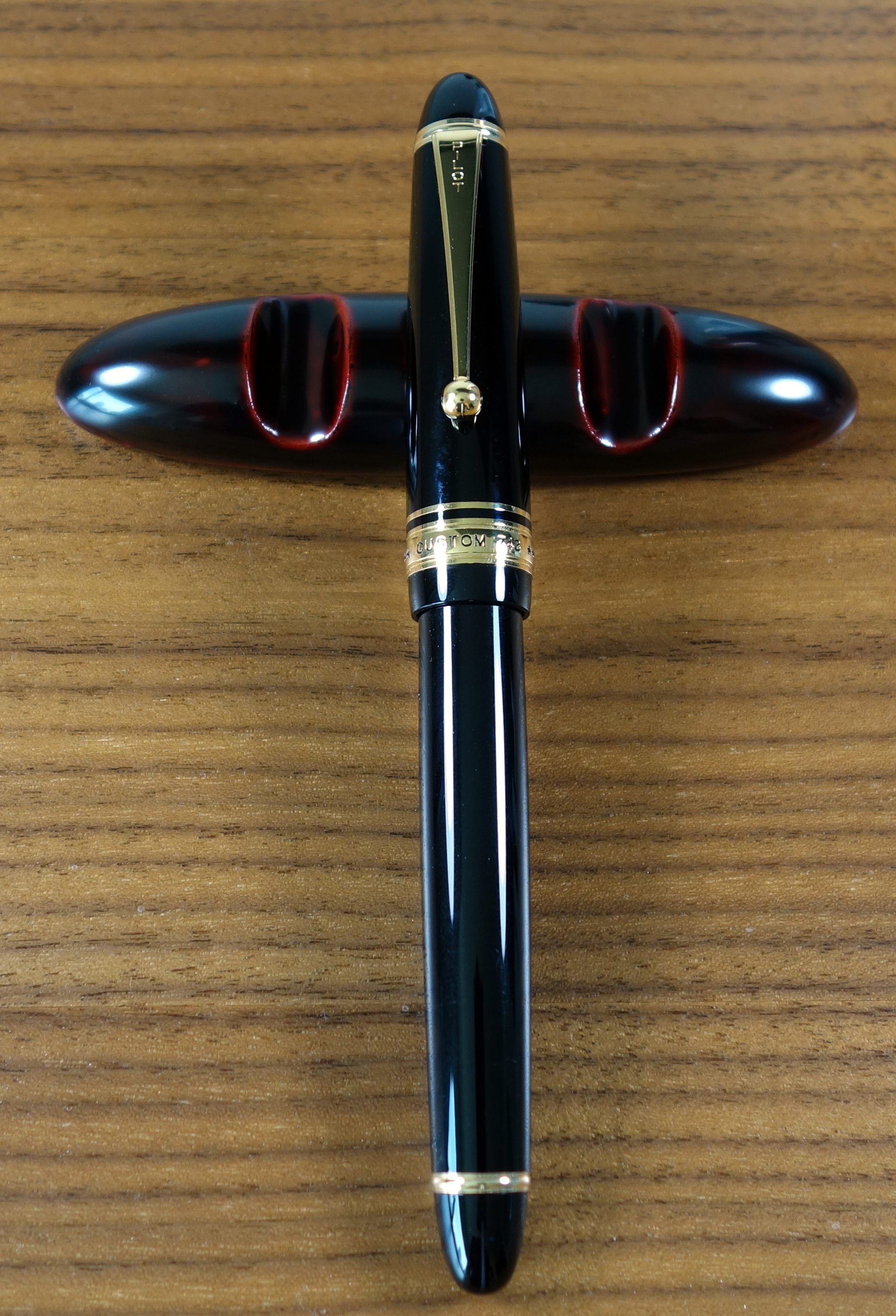 The Pilot Custom 743 is the only pen to use Pilot’s full line of #15 size nibs.  In the store I tried three of the more unusual nibs: a music nib, a Waverly nib and a falcon nib.   I ended up picking the falcon nib, which is a soft flexible nib.

Like most pens in the Custom series, the 743 is a very traditional and classic looking executive pen with a black plastic body and yellow gold furniture.  The trim level is the same as you get on the Custom 823 and they look almost identical.  The trim ring on the bottom of the body is closer to the end of the pen than on the 823 (the 743 has vacuum mechanism to accommodate) but otherwise they look the same.

The cap has a rounded top with a clip that starts broad and narrows ending with a ball; this is the classic Pilot/Namiki clip and I think it looks great.  The gold band at the bottom of the cap reads “* * * CUSTOM 743 * * * PILOT MADE IN JAPAN”.  The letters are filled in with black (paint?) just as you would see on the Custom 845 and Custom 823.  The large 14ct gold #15 nib is plain, with no decoration to speak of.  The cuts on the sides of the nib help to increase flexibility and in my opinion make up for the lack of decoration.

The gold trim is much more yellow in color than the 14ct gold nib.  This is quite apparent with the cap posted.   I would like to have seen the gold match a bit better but it’s not a big deal.

All things considered, the Custom 743 is a clean looking pen with no strangeness to its proportions.  It’s not going to score any points for originality but it’s a nice looking pen nonetheless. Score: 3/5

The build quality like most Pilot products is quite good.  The section (as on the Custom 845) has two big seams that just look cheap on a $300 pen.

Unlike the Custom 845, the 743 also suffers from seams on the body as well. They are clearly defined in the threading on the body and then they disappear about a quarter of an inch in on the glossy part of the body.  You wouldn’t really notice any of this unless you are looking closely.  The fit and finish is otherwise quite good and I suspect this pen will last a long time.  Score: 2.5/5

I think it is fair to say that this pen will not be for everyone.  I was lucky enough to try it in a store in Japan before I purchased it.  It would be a mistake to think you are getting a new pen that is going to write like a vintage flex pen; it does not and I haven’t seen a modern flex pen that does.

The falcon nib is a bit on the scratchy side, not unpleasantly so but there is a good amount of feedback.  With little or no pressure the nib writes with a pretty fine line, definitely an extra fine by western standards.

If apply some pressure you can get the line to become broad but this will require more force than you would need on most vintage flex pens.  I find that with nib flexed and writing slowly (as you should) the pen has a tendency to railroad by which I mean produce two thin parallel lines instead of one fat line.  The feed seems unable to keep up with the pen.

I have been experimenting with different inks and I have found Diamine inks to work the so far.  I tried Noodler’s Blue Eel as I thought that might help with the railroad situation but alas it performed the same as the Waterman and Pilot inks I tried.

In normal writing there are no real performance issues and I can get some nice (not huge) line variation with medium pressure without causing any problems but if you want to make extra extra fine lines and triple broad lines the Falcon nib isn’t going to cut it.  With a careful hand (sadly not something I possess) I have seen some beautiful western writing with the 743 Falcon.  Score: 2/5

The Custom 743 uses Pilot’s top-of-the-line Con-70 converter that is considered by many to be the best converter on the market.  It holds a good amount of ink and is quite easy to use. 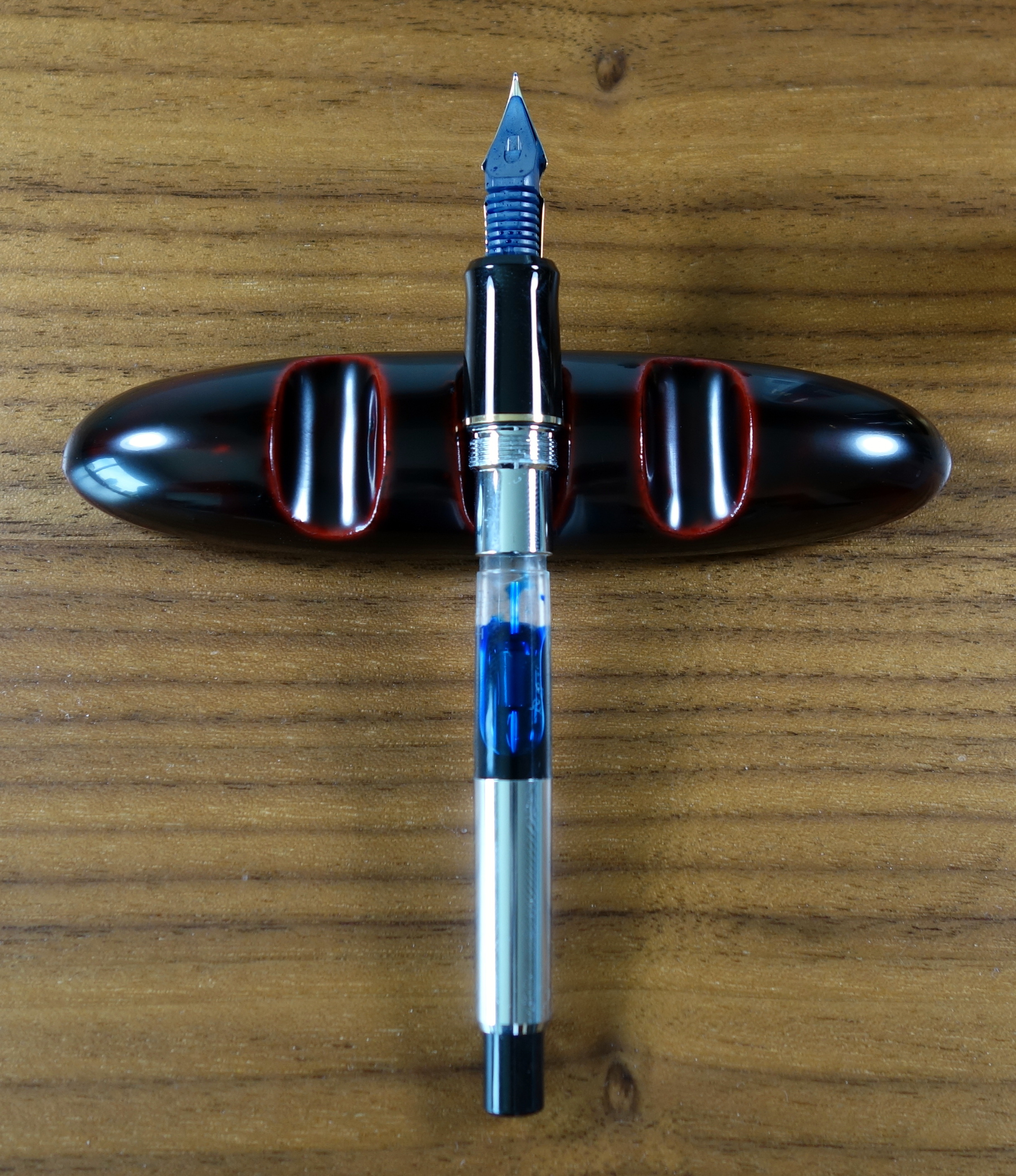 The 743 has the standard metal Con-70 which is not quite as nice as the black one you get in the Pilot Custom 845 and most Namiki pens but the function is the same.  Score: 3.5/5

The feed prevents the 743 Falcon from living up to its full potential as a “flex” pen.