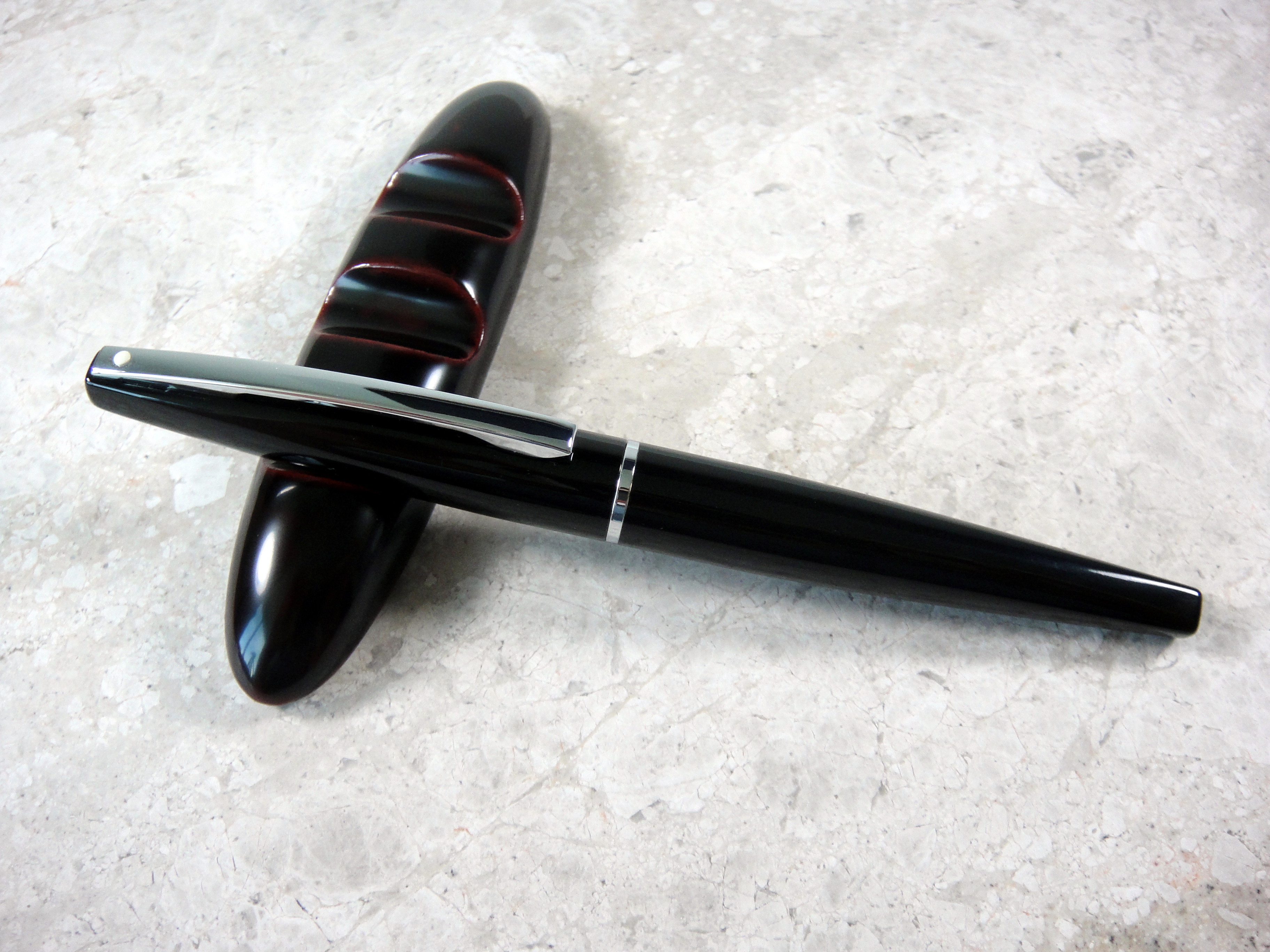 The Sheaffer Taranis is the first modern Sheaffer fountain pen I have used in a long time.  As with the Parker 51, it has been argued that Sheaffer’s vintage fountain pens are so plentiful (and consequently affordable) because in their day they were the best in the world.  Take the Sheaffer Snorkel for example, these pens had one of the most complicated filling systems which allowed the user to fill the pen without dipping the nib in ink.  I know us Montblanc lovers rave about the telescopic filling system used in the 1950s and earlier but on engineering merits alone the Snorkel goes far and beyond.  I bought my Snorkel dirt cheap and it performs beautifully.

Sheaffer has dubbed the Taranis “groundbreaking” so let’s see how the it measures up. The Taranis gets its name from the Celtic god of thunder and as far as appearances go I don’t see a connection.  Designed by architect Charles Debbas, the Taranis’ main feature is the patent pending grip section and semi-hooded nib.  The idea behind the grip is that your fingers touch the resin parts, while the metal remains exposed such that you can see the Sheaffer name running down the section.

I like the design, however I have a few problems with the looks of the nib; viewed from the side, you can see that the nib really isn’t flush with the section which would be fine if the nib didn’t stick out so far, but it does.  I think an inlaid nib would have looked better.  The second issue I have (and perhaps this is just my problem and not the pen’s) is keeping the point in the correct position on the paper.  I find that I am rotating the point away from its sweet spot and at quick glance it is not obvious; as a result, I find I am spending more brain cycles than normal trying to right its position. Overall I am a fan of the tapered black resin body and the elongated clip with the classic white dot.  It is a nice clean simple and balanced design.  The Taranis comes in several colors; the black resin model that I am reviewing is referred to as “Stormy Night”.  You can see from the pictures this pen is fingerprint prone. Score: 2.5/5

The Taranis feels high quality and for $145 (retail), it really should.  The bottom of the barrel has a nice brass lining and the cap is lined with plastic.  The resin body has no seams and feels quite nice to the touch.  The cap clicks securely on to the barrel and requires little effort to remove.  The clip when viewed from the side looks a little cheap as it is hollow and thin looking but it does feel strong and tight.  I was a little disappointed when I found out that the Taranis is made in China; I do not think that this necessarily is a negative on the quality front but I do think it should be pointed out.  The Taranis is on par quality-wise with the majority of its competitors.  Many pens in this price range have gold nibs and I would have definitely liked to have seen that on the Taranis. Score: 3/5 The Taranis weighs approximately 35 grams which is a comfortable weight, though a bit heavier than I normally like. The pen is well balanced such that it does not cause any comfort issues for me.  Being that the brass lining is only in the bottom part of the barrel the pen has about the same balance capped and uncapped which is a rare quality that I quite like.  Capped the pen measures 5.5″ and uncapped about 4.75″.  At its widest point the Taranis is 0.5″ thick.  This is a average-sized pen very similar in size and weight to a Pilot Vanishing Point.  Score: 4/5 The Taranis I tested has a steel medium point nib.  The nib is quite smooth to write with but it is one of the narrowest medium nibs I have used.  I would compare it to the medium on a Platinum or Sailor; the medium nib on my Pilot Vanishing Point was noticeably wider and juicier.  The nib on the Taranis is definitely a nail and out of the box it had no character; as the nib broke in more, the character improved but it’s definitely not a lively or fun nib.  I tried a couple of different inks in the Taranis and I found that the flow was a bit drier than I prefer but I have had no issues with skipping or hard starting.  Score: 2.5/5 While a cartridge/converter filling system is not the most interesting, it is becoming my favorite as it’s the most easy to deal with on a daily basis.  The Taranis uses Sheaffer’s proprietary cartridges and converters; this is a big drawback if you like to use cartridges, as you will be stuck with Sheaffer inks.  On the plus side the converter that comes with the Taranis is nicely made and holds a decent amount of ink. Score: 2/5 With chrome trim the Taranis is $145 and with gold plated trim the Taranis is $195.  I cannot say that this pen is a value.  For $140 you can buy a Pilot Vanishing Point with an 18kt gold nib.  The price for me is way to high to be compelling.  There are so many great pens at this price point and by comparison the Taranis falls short.  I really wanted to love this pen but sadly it just didn’t happen for me.  Score: 2/5

The Taranis is a good pen with an interesting design but at this price point it just doesn’t make sense. Final Score: 16/30 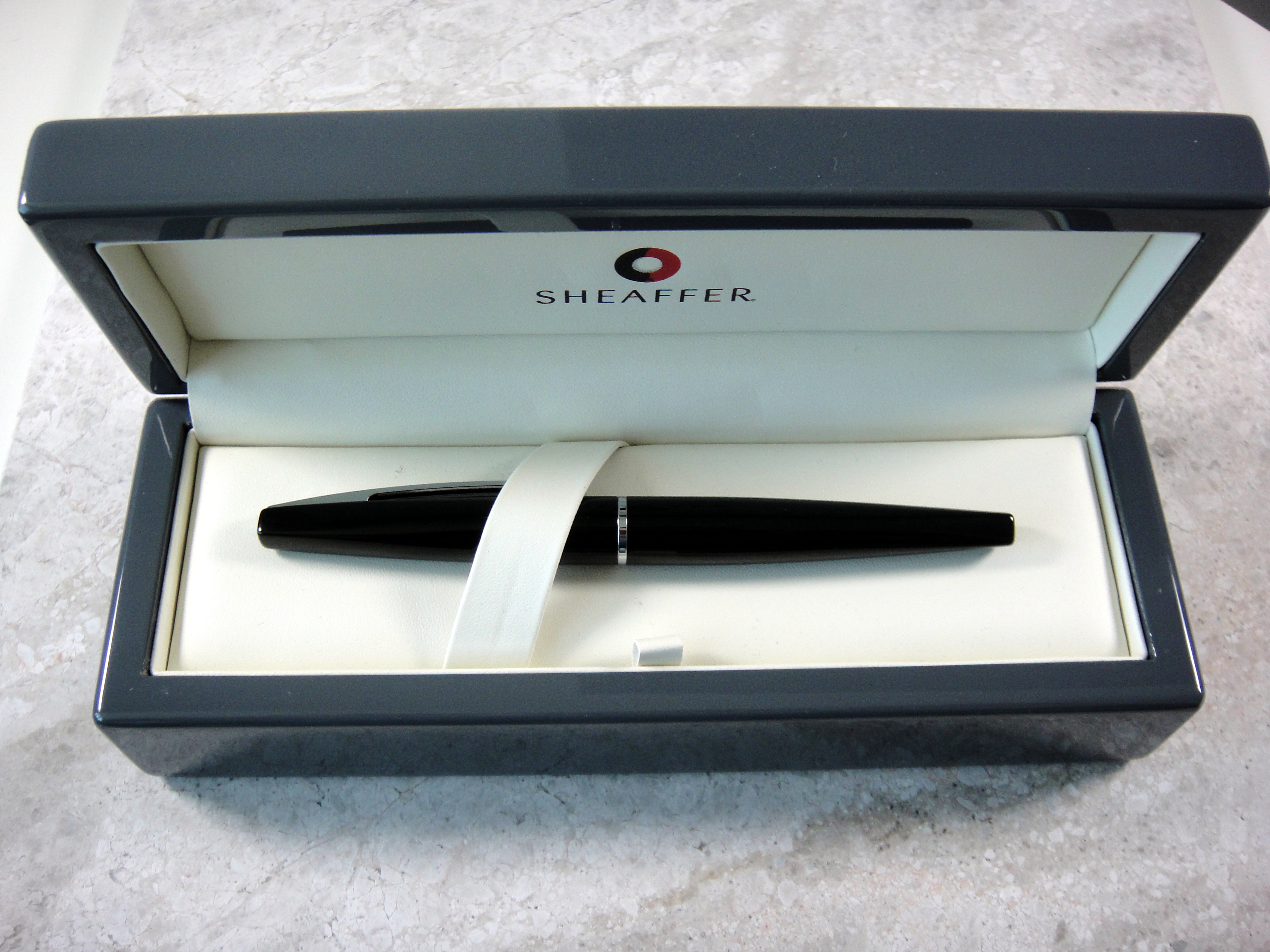 Please note: this product was provided to me at no charge by Sheaffer for review purposes.

Here are some great reviews of the Sheaffer Taranis: