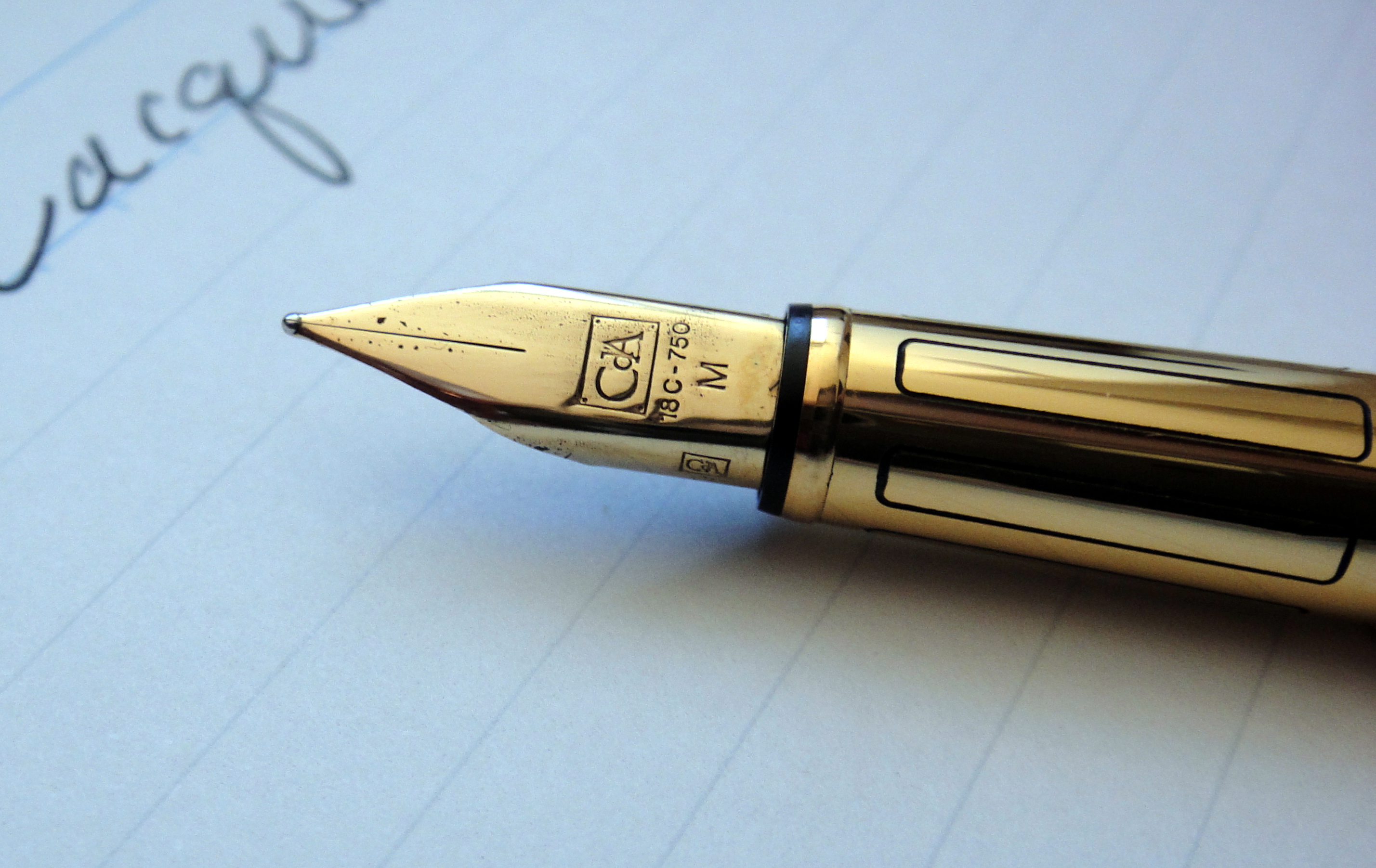 The Caran d’Ache Hexagonal Ecaille Chinese Lacquer fountain pen is an odd ball in my collection.  I don’t like skinny pens nor do I like fingerprint prone pens and pens with metal sections….this pen is all of these things.  So why do I have it you ask? It was the price. I saw this pen new old stock in a small pen shop in the Netherlands and I just couldn’t let it go.

I have decided to use a more standardized review process for nicer fountain pens with six categories and a scale of 1-5 (5 being the best and 1 being the worst).

The Hexagonal shares the same shape as the original Caran d’Ache Ecridor pencil.  The combination of gold plate and red marbled Chinese lacquer are pretty dated looking but the fit and finish make this pen still beautiful in my eyes as an objet d’art.  I can’t think of another pen in production today that is comparable.  The Hexagonal Chinese Lacquer is still listed on Caran d’Ache’s website but if you look around you will have a hard time finding one.  The rectangles carved into the grip section are a touch I quite like.  I love the squarish shape of the 18kt gold nib and the lack of a breather hole.  My pen is from the 90s and the more recent Hexagonals have a more traditional nib with a breather hole.  This pen is a fingerprint magnet and I worry that even wiping it with a soft cloth with scratch it.  Score: 3.5

Just by looking at the Hexagonal you can tell that it is of the highest quality.  The “Maison de Haute Ecriture” will never disappoint you in the quality department.  The gold plate is beautifully polished and the hand painted Chinese lacquer is gorgeous.  Running your finger on the barrel you will notice that there is a seamless transition between the gold and lacquer; you cannot feel it at all.  The rectangle shapes carved into the section are painted with lacquer.  The pen both caps a posts with a crisp snap.  This is an incredibly well made pen and is easily on the same quality level as S.T. Dupont and Graf von Faber-Castell. Score: 5 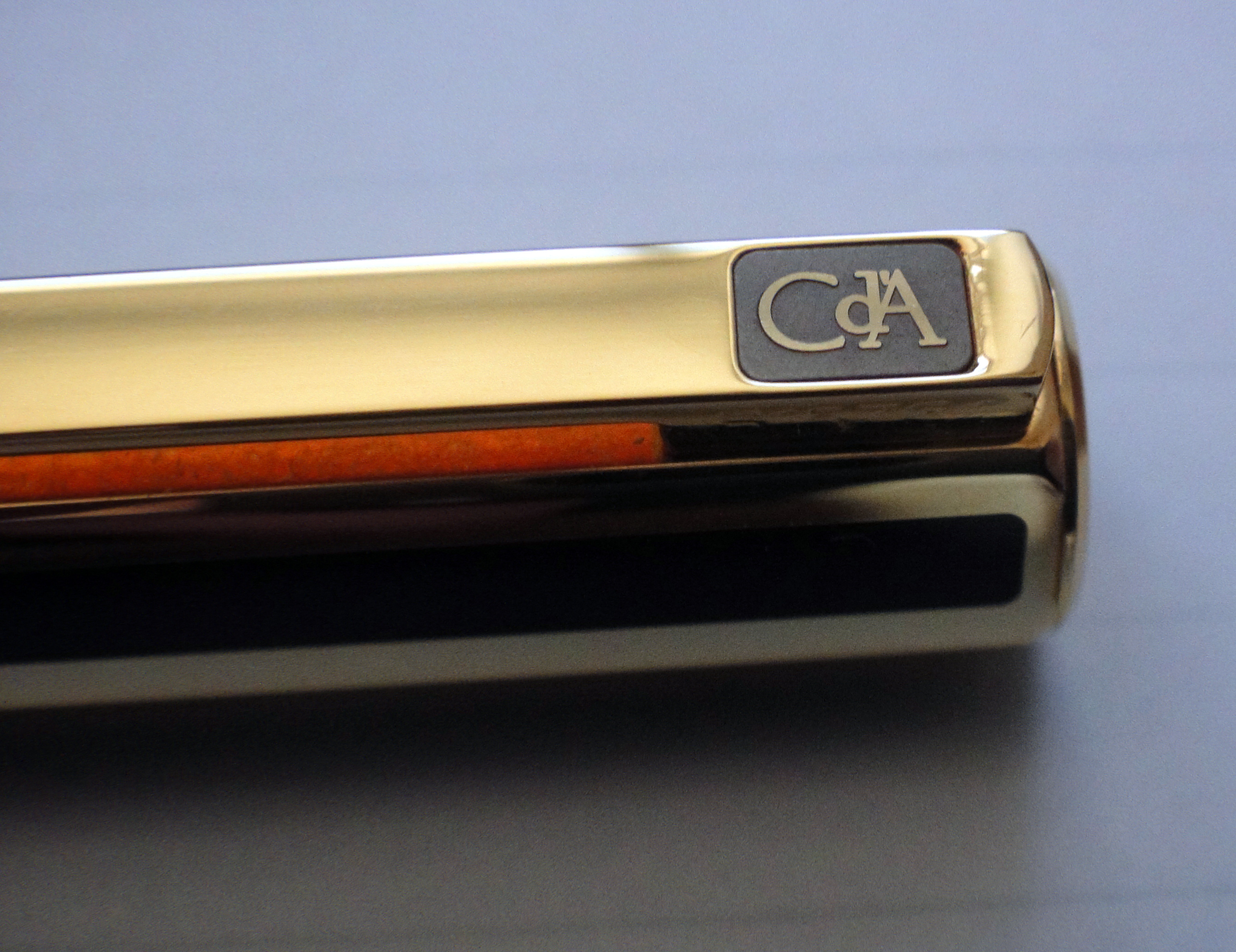 The Hexagonal weighs in at just under 27 grams which is neither light nor overly heavy for a normal fountain pen.  The pen measures 5.25″ capped, 6″ posted and without the cap the pen measures 4.75″.  At its widest point it is less than half an inch thick and the grip section measures about a quarter of an inch thick.  The weight and the length of the pen are all excellent but the width makes this pen uncomfortable.

What Caran d’Ache did was made a capped version of the Ecridor pencil which has the same girth as a pencil wooden pencil.  Keeping the same form factor with a capped pen means shrinking the grip section width and this is a serious problem comfort-wise.  The smaller the girth, the more pressure needed to control the pen and when you consider that this pen weighs many times more than a wooden pencil the result is not brilliant.

I wrote a letter with the Hexagonal and about half way into the second page my hand was in pain and it was a struggle to continue.  As a pen for quick notes you shouldn’t run into any problems but I wouldn’t recommend it for long writing sessions at all.  Score: 1.5

The 18kt gold medium nib writes well and is very smooth with some light feedback. I have had no issues with skipping or hard starting.  The performance of the nib has been flawless for me.  It’s a pretty stiff nib so you wont see much in the way of line variation.  I love nibs with character and unfortunately (like most modern nibs) the Hexagonal’s nib does not have much.  Score: 3

The Hexagonal uses a cartridge or converter which is a feature I am starting to like on high-end pens.  A piston filling system is more expensive to produce and holds more ink but from a cleaning perspective is much less desirable.  I like to be able to change inks frequently and a cartridge or converter allows me to do just that without much hassle.  I can easily go from an dark black to an ultra light orange without even giving it a second thought.  With a piston fill pen I wouldn’t be able to make that change without a ton of cleaning.  I use a regular Waterman converter with the Hexagonal and I have had no issues.  Like the nib, the performance is good but there is nothing special to note here.  Score: 3

The retail price of this pen (with the updated nib) is about $1,300 and I could never pay that for this pen.  The quality is certainly there but it’s just not comfortable.  I also feel as though there is no X-factor with this pen like you would have on many similarly priced pens from other manufacturers.  I paid about €120 for my new old stock Hexagonal and at that price it is not a regret for me but it also isn’t a home run purchase as I rarely use it.  Score: 2

Unless you love the style and can put up with the thin grip section, the Hexagonal isn’t a pen I would ever recommend.  Final score : 18/30