The Pilot Down Force is a pressurized ballpoint pen that is designed to write at any angle.  I don’t have any need for a pressurized pen but I liked the loud yellow body so I bought it as an impulse buy.  My favorite thing about this pen is the satisfying click it makes, apart from that and the bright yellow body I didn’t find much else to like.  The plastic body is a bit too fat for my taste and the 0.7mm refill is okay, not as nice as what you find in a Pilot Acroball.  The line is darker and sharper than a Fischer Space pen’s and it’s cheaper but at $8 its not cheaper than a Uni Power Tank.  The Uni Power Tank is writes better, is pressurized and costs less than half the price of the Down Force.  If you really enjoy clicking pens the Down Force might be worth a look but if you just want a nice pen don’t bother; this one’s crap. Here is another review of the Pilot Down Force: (I have not affiliation to the site linked below)

Lamy’s Dialog line features high end pens designed by prominent industrial designers.  The Dialog 1 was designed by Richard Sapper, most famous for the Tizio Lamp by Artemide and the original IBM Thinkpad.  The Dialog 1 features a metal triangular shaped body with a matte titanium finish.  The pen weighs about 24 grams, which is pretty lightweight for a metal pen.  The triangular shape of the body is comfortable to use.  The bottom side of the pen is lightly rounded and has two little plastic feet to steady the pen on a flat surface. The Dialog 1 uses a push click mechanism and has a spring-loaded metal clip.  Underneath the clip is the Lamy logo etched into the body. 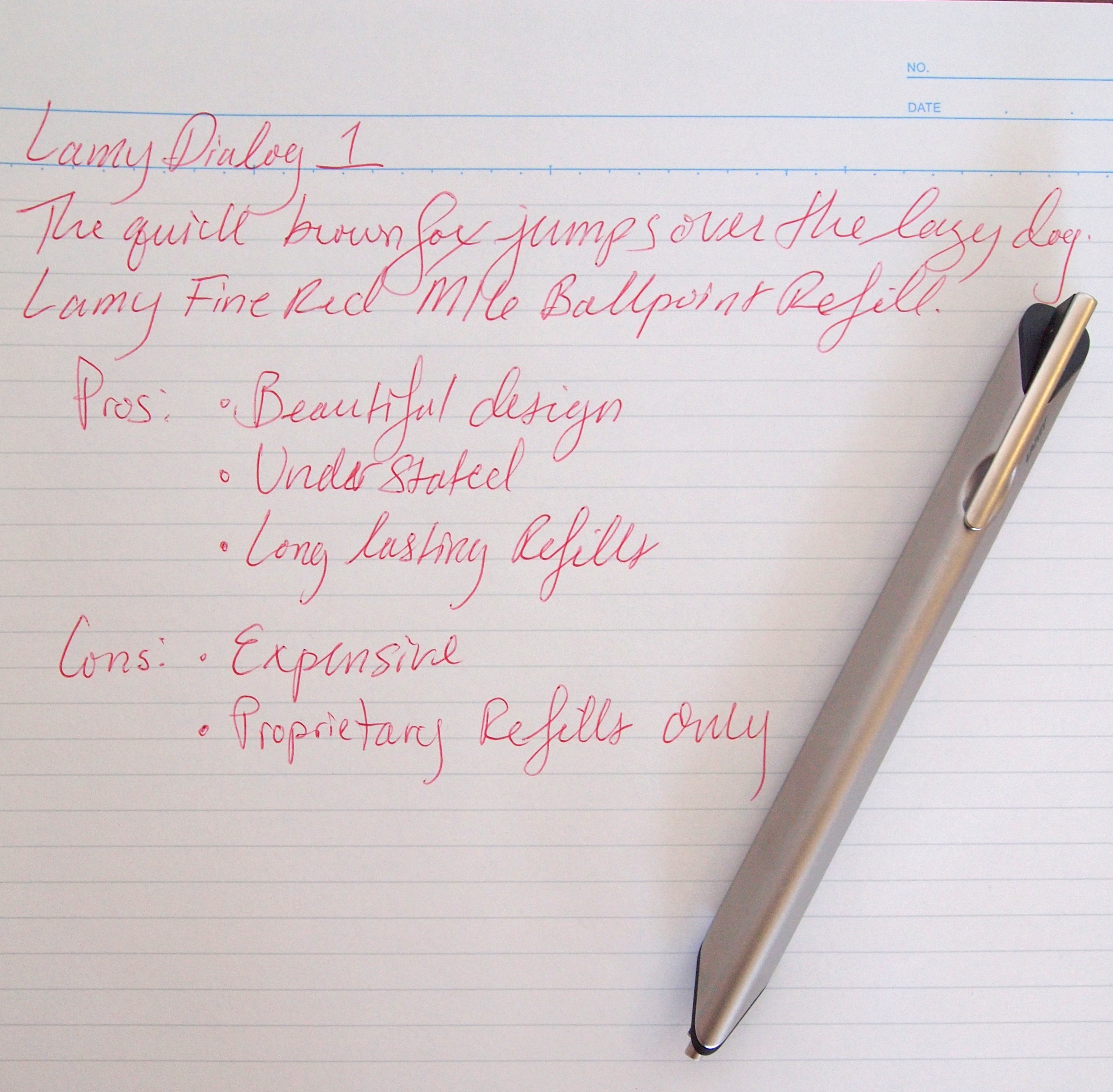 The Dialog 1 only takes propriety Lamy M16 refills that come in black, blue, red with a fine, medium, or broad tip.  They write well for a standard ballpoint and last a very long time.  The ink is archival and states “for documents ISO 12757-2 HM DOC” on the body of the refill.  The sample above is written with a red fine tip M16 refill.  To change a refill you have to use the non-writing end of an M16 refill to poke the small dot on the black plastic portion near the tip of the pen; this releases the front section of the pen so that you may load the new refill.  It is an interesting way to change a refill but necessary to keep the lines of the pen ultra clean.  Also worth noting is that the matte titanium finish does attract fingerprints; I usually don’t like metal pens for this reason but the matte finish makes it more bearable. 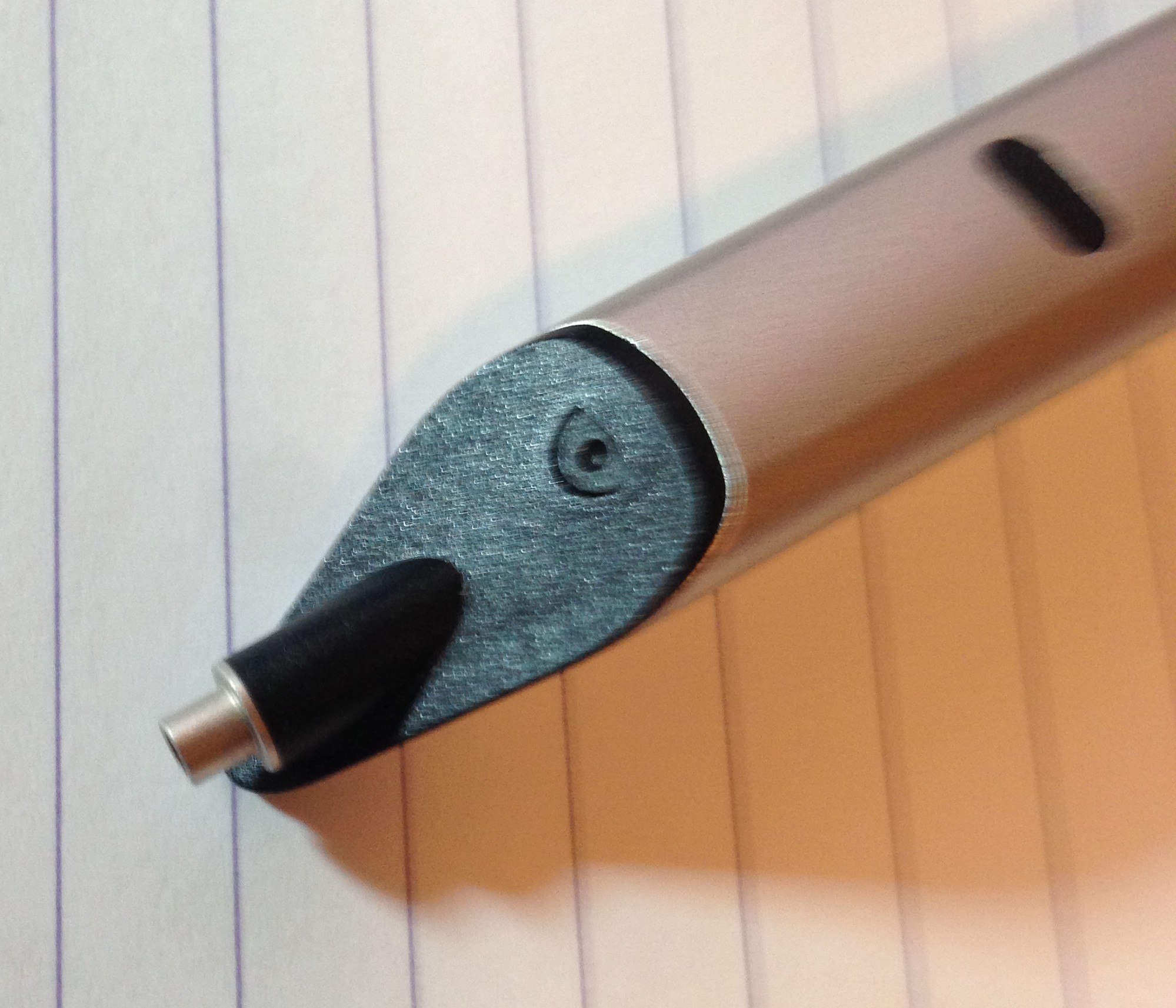 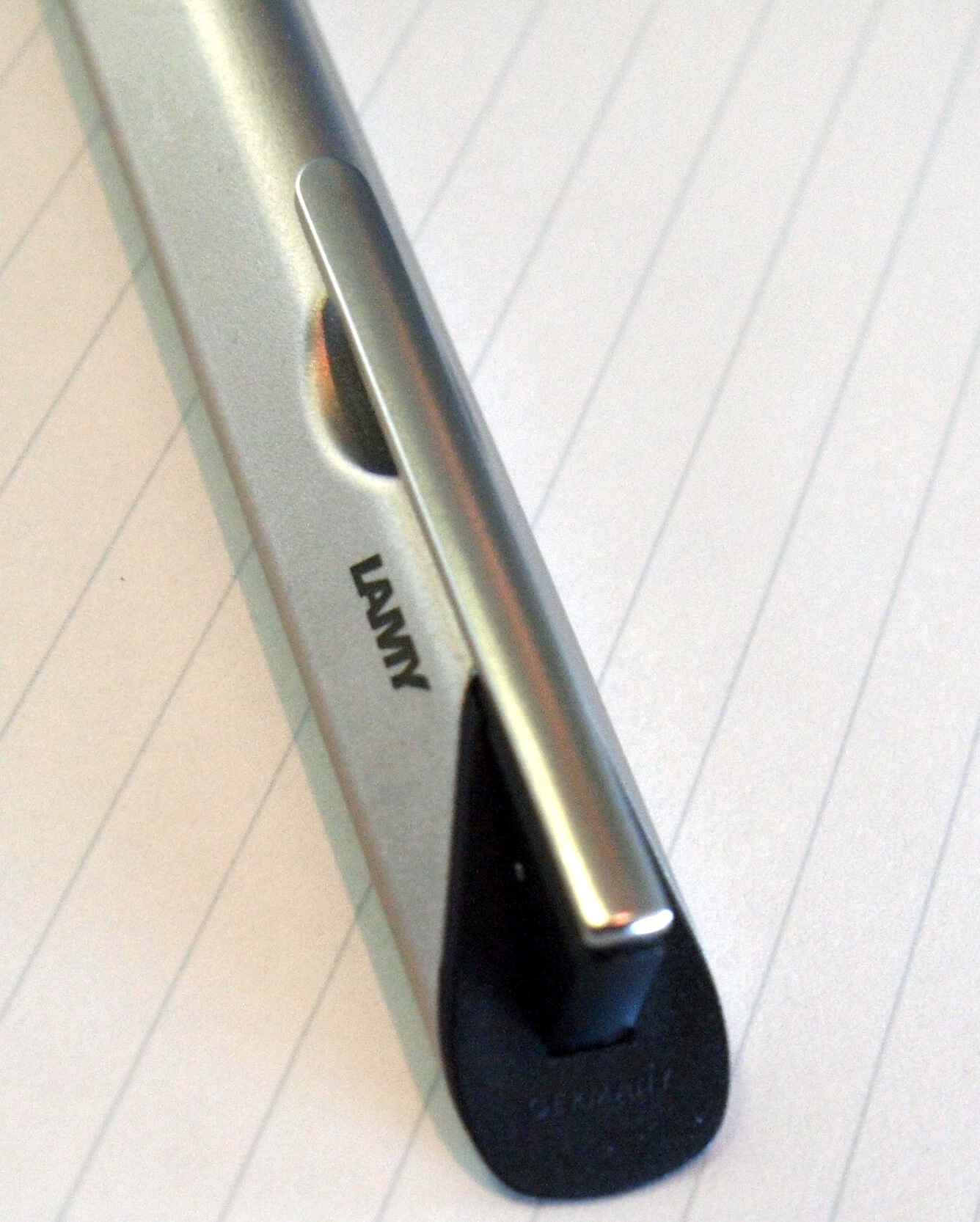 The Dialog 1 retails for $130, that is a pretty big investment for a pen that uses a $5 refill.  I bought the Dialog 1 because I love the beautiful utilitarian design and wanted a nice pen to travel with.  The Dialog 1 is a real conversation starter without being flashy or over the top; I highly recommend it.

I have never been a fan of non-gel ballpoints; the ink is generally inconsistent and not particularly vivid.  I have received ballpoints as gifts on a number of occasions and on a pen blog it would be wrong to ignore them.

The S.T. Dupont Liberté ballpoint is made from a brass barrel finished in black lacquer (not the more expensive Chinese lacquer S.T. Dupont is famous for) with palladium accents.  The tapered design is elegant and the top of the cap its faceted with “D” in metal.  Even though this is a lower end model for S.T. Dupont it still costs a whopping $480 retail.  The Liberté is a fingerprint magnet and that drives me nuts but the fit and finish is exceptional. 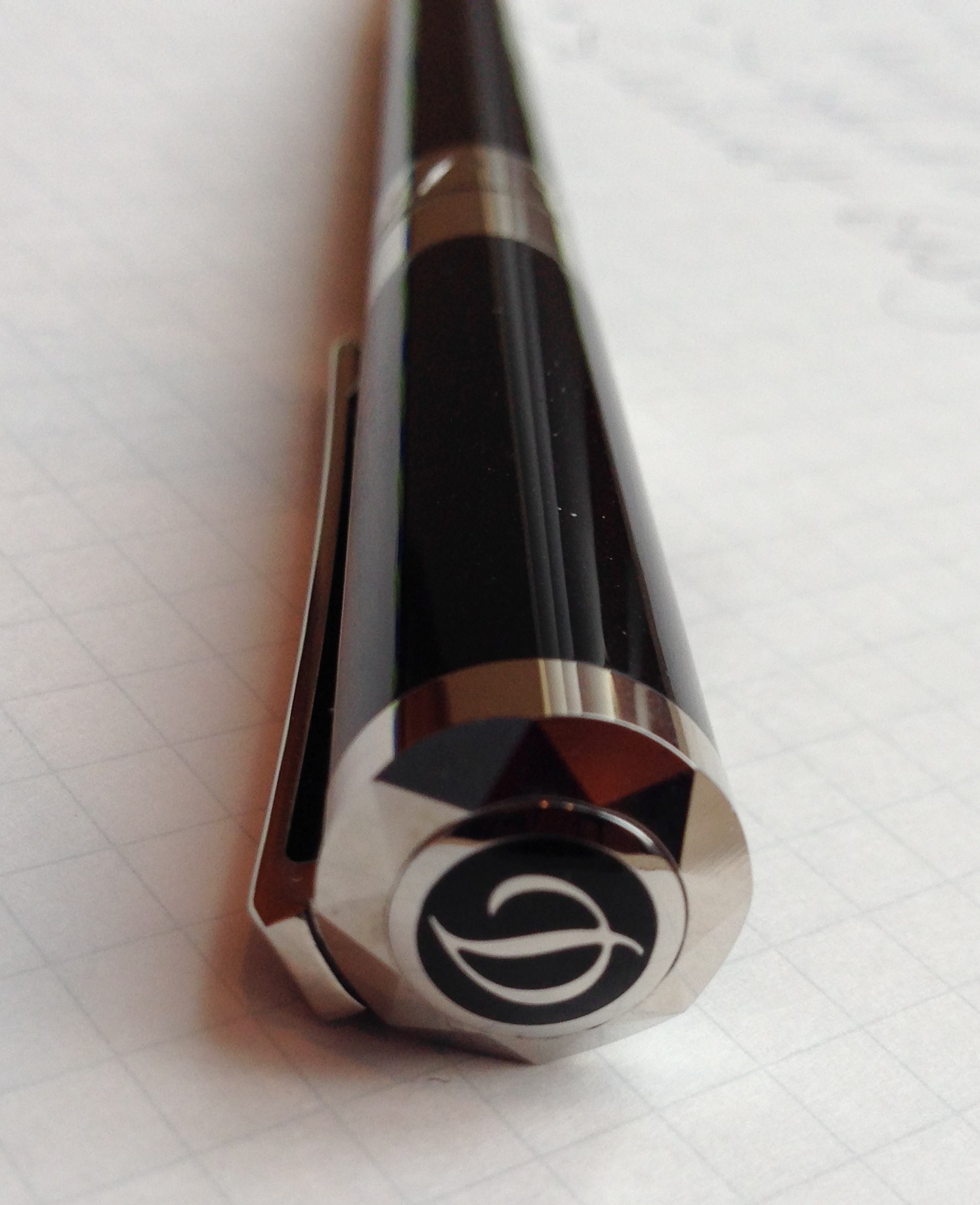 The Liberté weighs in at 1.16oz which makes it a heavier pen but in my hand it is incredibly well balanced.  The body of the pen attaches to the cap with threading on the INSIDE of the barrel (see below).  To deploy and retract the ballpoint you simply twist the pen.  The twist mechanism is both very smooth and very crisp.

The ballpoint is an S.T. Dupont branded EasyFLOW Schmidt refill that is unusually smooth.  It is so smooth in fact that I felt inclined to write in my normal cursive-esque hand.  Unfortunately the look of the ink is unusually hideous.  The easyFLOW refill always starts up without delay which is nice but when the ink looks this washed out and faint who really cares? 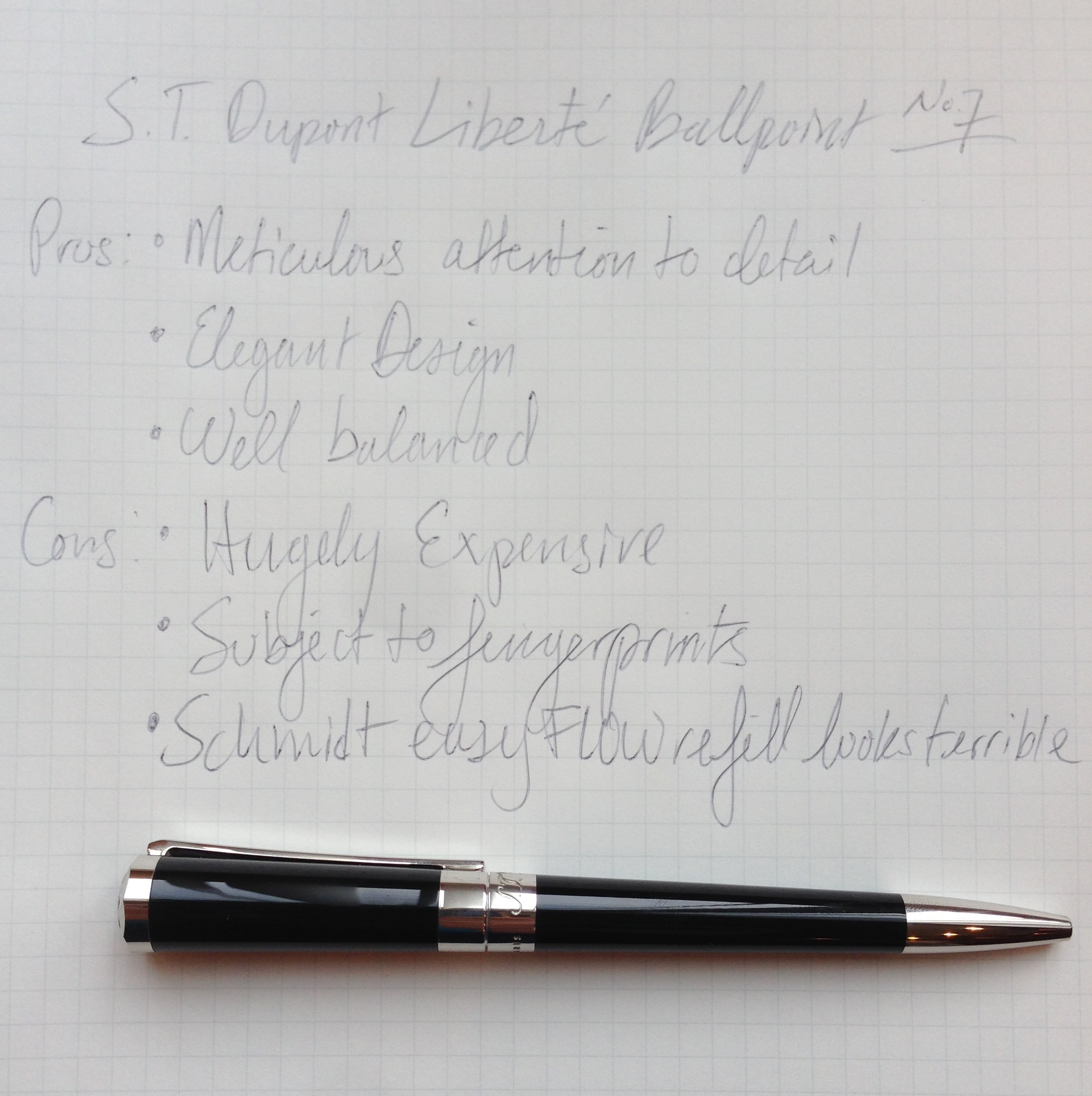 With a better refill The S.T. Dupont Liberté would be a great ballpoint pen that quality-wise is superior to many pens in the same price-range (the modern version of the Montblanc Meisterstück and the Cartier Diabolo come to mind).