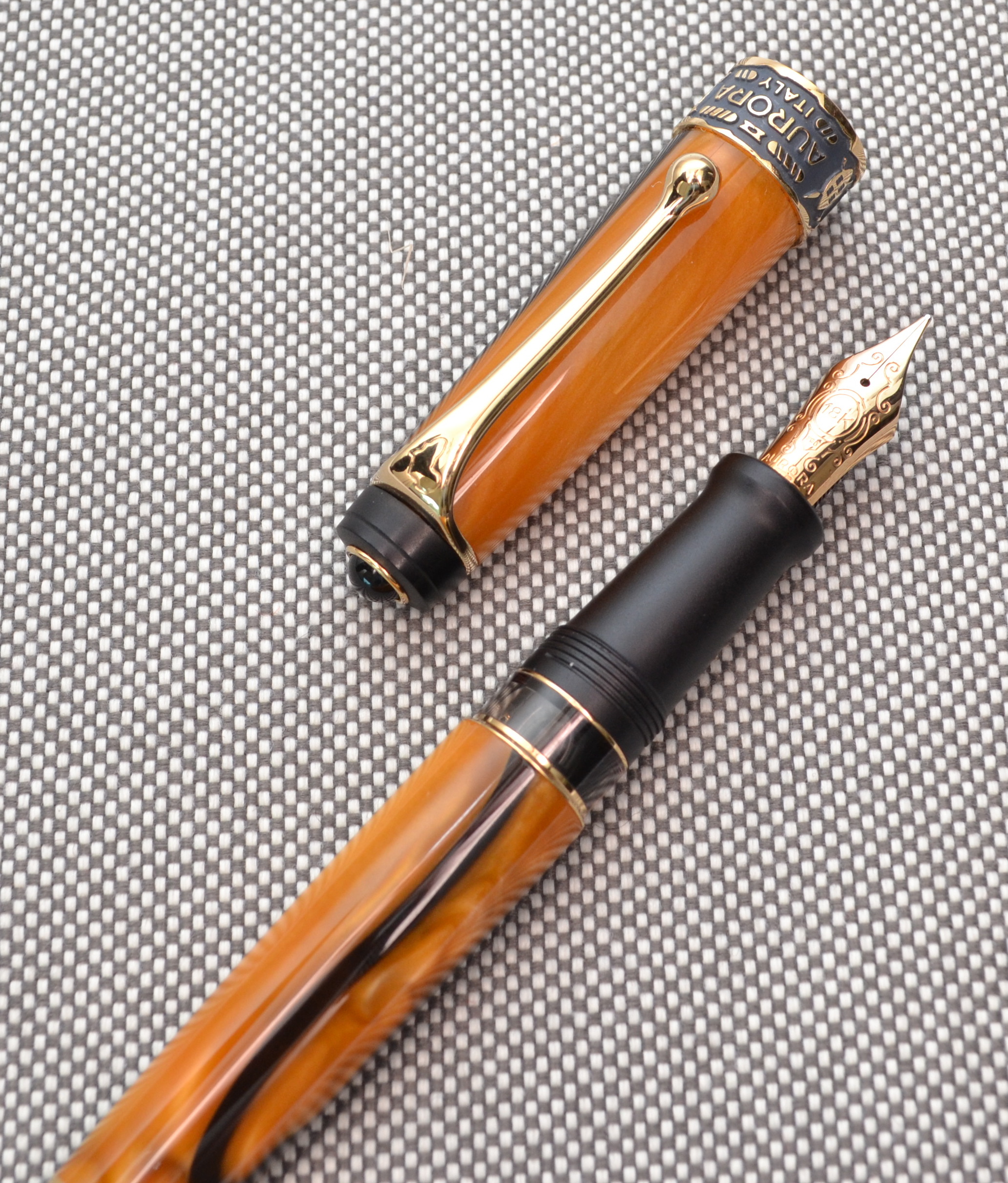 The Aurora Afrika is the first in Aurora’s Continents series of limited edition pens. Each pen is based on Aurora’s top-of-the-line Optima, which is one of my favorite modern fountain pens. Aurora produced 7,500 Afrika fountain pens and I have acquired No. 2486.

The Afrika looks like an Optima but with some key improvements. The shiny black resin section and end caps have been replaced with matte black resin. The cap ring has been improved with a deeper and more intricate engraving that provides much more contrast.

The body is made out of a marbled “Land of Afrika” resin that is a gorgeous orangish gold color with black swirls. This resin has a lot of depth, much more than an “Auroloide” Optima.

The large and beautiful 18kt gold nib shares the same design as the Optima and other high-end Auroras.

The design of the Optima is uniquely Aurora and while it looks like no other pen, I do have to admit that its stocky appearance has not always been my favorite. With some key enhancements the Afrika has more than just a great personality, it has a beautiful face as well.

Let’s start with a confession; I recently broke my Aurora Optima. The piston knob came off. I set the pen down with the piston unscrewed to attend to something else and when I came back to it I suspect that I turned it the wrong way without thinking and off it came. This is the first pen I have broken in very long time, ten years maybe. It is now on holiday in Italy for the time being.

It is possible that the glue failed but I am waiting to hear Aurora’s assessment before I make any judgements.

For all intents and purposes the Afrika is of the same build quality as the Optima. The engraving on the cap ring is the only thing that stands out to me as an improvement…the other differences I sighted in the appearance section are merely a more tasteful selection of materials and design choices.

Even though I broke my Optima I still believe that it is one of the highest quality fountain pens money can buy. Like the Optima, the Afrika has the smoothest piston mechanism I have used and the fit and finish are flawless. Aurora makes their own nibs in-house and uses solid ebonite feeds…I don’t think there is more that I can ask for.

The Aurora Optima first appeared in the late 1930s as a competitor to my favorite vintage pen, the OMAS Extra Lucens.

One of the things that Aurora got right that almost all vintage Italian makers missed was girth. Aurora made fat pens. Anything other than the senior and oversized models from OMAS, Ancora, Montegrappa, Columbus and so on are too skinny for me to use comfortably but the medium and small Auroras are comfortable because they are fat.

The Afrika takes after the vintage Optima’s 1930s proportions. Measuring just 5.1” with a section diameter of 0.4”; that’s the same size my Nakaya Naka-ai and my OMAS Paragon which each measure almost 6” long.

The section is fat but unlike my Nakaya and OMAS the grip section is also very long which makes the Afrika (and Optima) one of the most comfortable pens on the market. The section is big enough to accommodate almost any grip style.

The Afrika is ever so slightly heavier than the Optima weighing in at 22.2 grams which still makes the Afrika a lightweight pen by any measure.

When it comes to size and weight the Optima is appropriately named….it gets everything right (as does its African sibling).

As I mentioned earlier, Aurora makes all of their nibs in-house and as such their nibs feel different than any other manufacturers. Aurora’s obliques, stubs and italics are sharper than any other big brands I have come across.

Aurora’s round pointed nibs have more feedback than most other quality brands as well. They are more or the less the opposite of the buttery smooth nibs Visconti is known for and as such Aurora’s nibs can be polarizing.

People love them or hate them. I for one like the feedback because it helps me slow down my cursive and really focus on properly forming my letters (don’t look at my writing sample)….if a Visconti nib is a rollerball (which slides all over the place) the Aurora is like a pencil…you feel in control.

My Optima has a 14kt gold nib and the Afrika has an 18kt gold nib and while the design and shape are all the same I have noticed some differences using a small sampling of each. Both nibs are nails…one isn’t more flexible than the other but the 18kt nibs seem to have a finer line width than the 14kt gold ones that I have tested.

All of my Aurora pens have been flawless performers out of the box and the Afrika is no exception.

The Afrika is a piston filler that holds 1.1ml of ink which is more than most converters but less than many full sized piston fountain pens. The Afrika also features Aurora’s “reserve tank” technology. When the pen runs out of ink you twist the piston knob all the way and the “reserve tank” is activated, allowing you to write for a couple more pages.

Personally I find the reserve tank annoying. It makes it difficult to clean the pen and change ink colors because with the piston fully depressed there is still water or ink left in the pen by design.

Aurora recently raised their prices and the Afrika now retails for $1,075 but these pens can be found new in box on that auction site for around $350-$400. I picked up mine used for about $250 which is oddly less than you can get a used Optima for (these pens seem to be under the radar for the time being).

The authorized dealer street price is about $860 which when compared to a Montblanc 149 doesn’t seem crazy but the 149’s $935 price is only justified by people who view it as a status symbol and that’s something the Aurora cannot offer.

Also I should point out that the Afrika is a limited edition of 7,500 pieces and even though this pen has been out for more than 5 years Aurora dealers still have brand new inventory to sell.   It seems as though Aurora made too many and is asking too much. 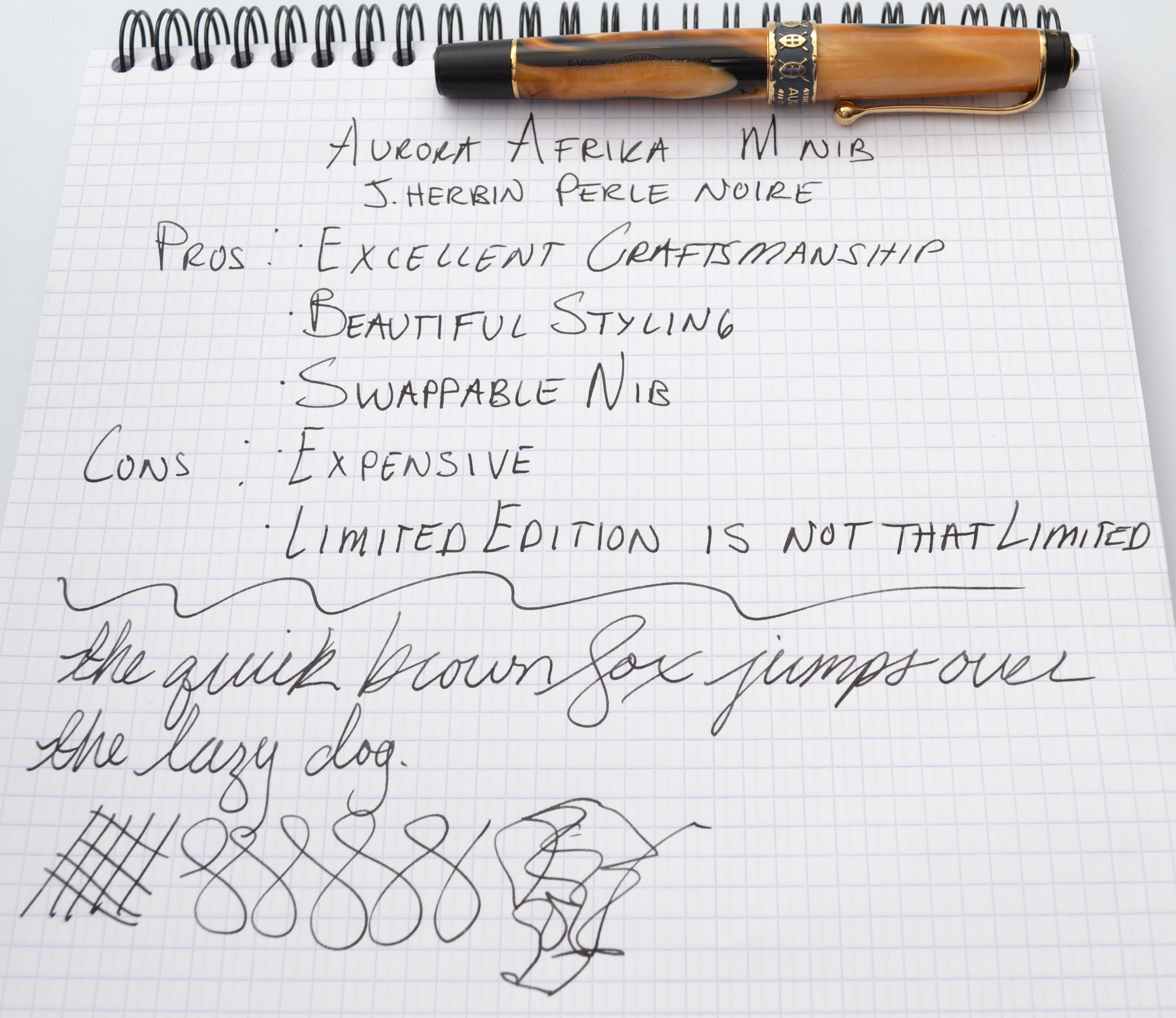 The Afrika is truly sublime and presents a tremendous value on the secondhand market.